How can we help you today?

The benefit of Predictive Focus is that it allows a useful estimation of focusing, without the need to autofocus at every field of the scan. This can be a big time saving. 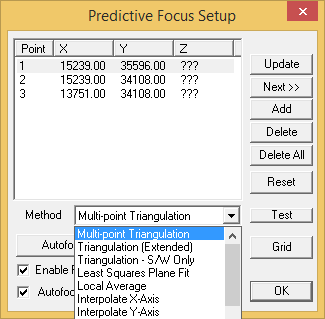 Typically the default Multi-point Triangulation is effective for most users and is unlikely to need to be changed.

Each option is given a basic description below, note that the concepts involved are not necessarily easily understood. The term "convex hull" refers to the area between the Predictive Focus points, if they were joined dot-to-dot fashion.

Did you find it helpful? Yes No

Send feedback
Sorry we couldn't be helpful. Help us improve this article with your feedback.